In this Cisco CCNA tutorial, you’ll learn about how EtherChannel load balancing works. Scroll down for the video and also text tutorial. 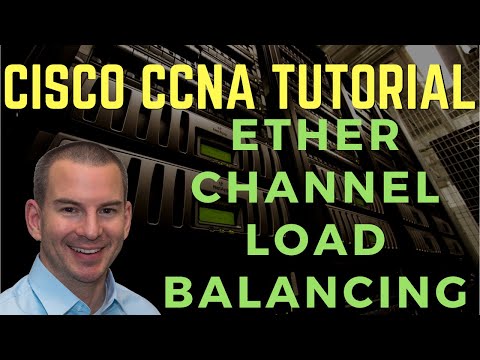 We’re going to cover how EtherChannel load balances the different flows that are going across the links between the switches. A flow is a communication from a client to our server using a particular application.

If PC-1, for example, opens a web session to Server-1 and PC-2 opens an FTP session to Server-2, we’d have two flows going through our switches. With EtherChannel, a single flow is load balanced onto a single port channel interface.

The first packet in the flow from PC-1 and Server-1 hits the first switch.

The switch decides which interface it’s going to load balance it over. It chooses Gig 0/1 for example, and then that goes to the server.

On the second flow from PC-2 Server-2, when that comes into the switch, the switch will use its algorithm to decide which interface the load balance it onto Gig 0/2 for example. Then, it goes to the server.

They’re not load balanced round robin across all the interfaces in the port channel. For example, we don’t load balance the first packet from PC-1 Server-1 on interface Gig 0/1, and then the second packet on that same flow to Gig 0/2.

The reason for that is that round robin load balancing could cause packets to arrive out of order at the destination, and that would break some applications. Therefore, we always load balance packets from the same flow on the same interface, so they’re always going to arrive in order.

The first packet and the flow went over to interface Gig 0/1.

Now, the second packet in the same flow went over Gig 0/2. This does NOT happen.

This works in such a way because a single flow always gets load balanced on the same interface. Any single flow receives the bandwidth of a single link in the port channel as its maximum. That’s a maximum of 1 Gbps per flow in our example where we were using 1 Gbps links between our switches and an aggregate of 4 Gbps across all available flows.

You can think of a port channel as a multi-lane motorway. The cars always stay in their own lane in a single lane, but because there are multiple lanes, the overall traffic gets there quicker. In our example, if we only had one uplink rather than four, we don’t have so much overall bandwidth available between the switches.

EtherChannel provides redundancy as well as load balancing. If a link fails, the flows will be load balanced to the remaining links.