In this Cisco CCNA tutorial, we’re going to cover troubleshooting at Layer 1 and Layer 2 of the OSI stack. Scroll down for the video and also text tutorial. 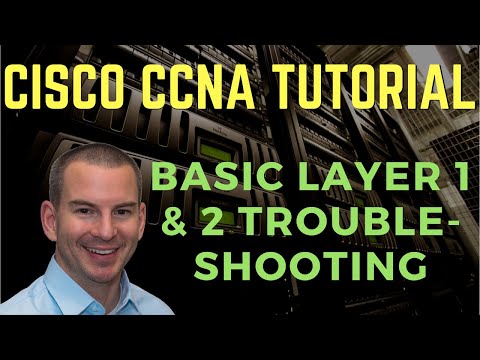 Thank you for the instructional videos for the certification course. I just passed the exam and was not difficult thanks to you.

Some common Layer 1 problems include the interface is administratively shut down. On switches, interfaces are up by default, but administrators can manually shut them down. It's actually best practice to shut down unused interfaces to stop users from plugging devices in there.

On routers, interfaces are shut down by default. If you configure an interface on a router, remember to do the no-shutdown command.

Broken connectors can cause loose connections and this happens quite commonly as well. On an Ethernet cable, the RJ45 connector with the clip on the end, it's quite easy for that to get broken off. Therefore, there isn't anything to retain it in the interface it's plugged into, and it's easy for it to get a loose connection that way. Also, bent or stretched cables can break the internal wires or fibers.

Lastly, Electro-Magnetic Interference (EMI) sources such as motors or microwaves can cause errors in transmission. That is not such a big problem if you've got a newer cable. CAT7 has got much better shielding than CAT3 cable does.

A useful command for troubleshooting at Layer 1 is:

When you enter the command, it will show you the status of the interface. If it shows "administratively down," that means you haven't entered the ‘no shutdown’ command. So, enter that command to bring the interface up.

If it shows "down/down," that means that the administrator has done a ‘no shutdown’ on the interface, but there's a Layer 1 issue. So, check that it is cabled in at both ends and that the device on the other side is powered on. If a device on the other side is powered off, or if you don't have a cable securely connected on both sides, the interface will show as "down/down."

Below is an example output of ‘show ip interface brief’. You can see that FastEthernet0/1 is up/up, so that is all good. FastEthernet0/2 is administratively down, so you need to do a ‘no shutdown’ on the interface to bring it up.

FastEthernet0/2 is down/down, indicating most likely a Layer 1 problem. Check that it's cabled on both sides and powered on the other side. FastEthernet0/2 is up/down, which most likely is a configuration mismatch between this device and the device on the other side for those interfaces. So, go on both devices, do a ‘show run’ and check the configuration on both interfaces.

The next command is ‘show interface’. If interfaces are reporting an excessive amount of errors, it could be either a Layer 1 or a Layer 2 problem. Check the integrity of the cable and check if there are no problems with the cable. Again, check your administrative configuration matches on both sides of the link.

Here’s an example of a ‘show interface’ command. If you enter the command and hit enter, you'll get a really long output because it'll show you the command for every single interface in the router or switch.

Usually, we'll do a ‘show interface’ and then specify interface like we've done here for FastEthernet0/2. We can see that it's set to full-duplex and the speed is 100Mb/s. We've got no input errors and no output errors, so that's a good sign.

A possible error you can have is speed and/or duplex mismatches on your interfaces. If you've got incorrect speed settings, that can cause the interface to operate below its maximum speed.

For example, if one side is set to auto and the other side is set manual, or if both sides are set to auto, and it doesn't manage to negotiate correctly, that can cause an incorrect speed setting where it's going to run below the optimal speed.

If you do a ‘show interface’ command, that will typically report a really high number of errors in that case which would give you a clue to what the problem is.

Again, both sides of the link must be set the same for the speed and duplex. Either set both sides to auto or manually configure both sides. Now, you don't need to do that for all ports.

Your Cisco devices will default to auto. If one side is set to auto and the other is manually configured, it will often result in a mismatch, so always set them both the same. Best practice is to manually configure ports attached to other network infrastructure devices or servers.

So, your drivers, your switches, your firewalls, et cetera, have those configured manually, also your servers. For your normal PCs, we'll typically leave that set to auto. Again, remember if you do configure it manually, do both sides of the link.

If a device has issues with auto-negotiating speed or duplex, then manually configuring both sides will normally solve that problem. If you do have a duplex mismatch, then CDP, Cisco Discovery Protocol, should detect that and it'll log it as you see in the example below. We've got a duplex mismatch discovered on FastEthernet0/0 (not half duplex). 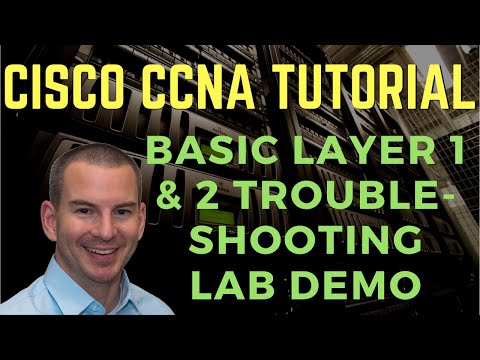 2. Shut down the interface connected to R2 and issue a show ip interface brief command again. The status and protocol should show administratively down/down.

3. Bring the interface up again. Verify the speed and duplex setting.

FastEthernet0/2 is up, line protocol is up (connected)

4. Set the duplex to half on Switch 1. Leave the settings as they are on R2.

5. Verify the state of the interface.

The interface is down/down. It will not forward traffic.

FastEthernet0/1 unassigned YES manual up up

FastEthernet0/2 unassigned YES manual down down

6. Set the duplex back to full duplex.

%LINEPROTO-5-UPDOWN: Line protocol on Interface FastEthernet0/2, changed state to up

8. Check if the interface is still operational.

The interface status is down/down.

The interface status is up/down on R2.