Why we have VLANs – Cisco CCNA Tutorial

In this Cisco CCNA training tutorial, I will cover Virtual Local Area Networks (VLANs) which is a Layer 2 feature implemented on switches. To understand why we have them, you need to understand the problem that they solve first. Scroll down for the video and also text tutorial.

Why We Have VLANs – Video Tutorial 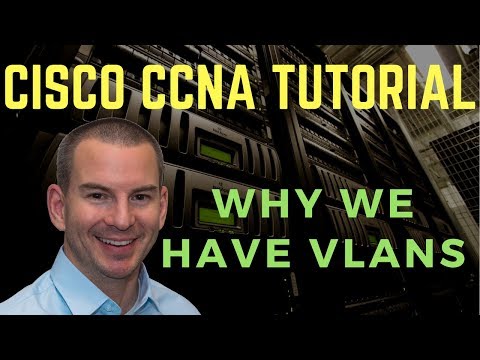 First, let’s look at the router operations. Routers operate at Layer 3 of the OSI Stack. Hosts on separate IP subnets must send traffic via a router to communicate. That’s the main job of a router, routing traffic between different IP subnets.

Security rules on routers or firewalls can be used to easily control traffic that is allowed between different IP subnets at layer 3. For example, all engineering hosts are in the 10.10.10.0/24 subnet and accounts hosts are in 10.10.20.0/24. If you don’t want the engineering hosts to have access to the accounting hosts, security rules can be implemented on a router or firewall to block traffic from the 10.10.10.0 subnet to the 10.10.20.0 subnet.

Routers do not forward broadcast traffic by default. They provide performance and security by splitting networks into smaller domains at layer 3. 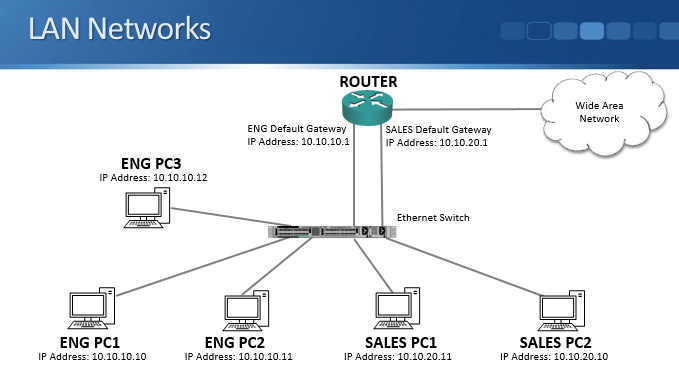 Let’s take a look at the example above. We have a simple LAN with one switch and a few engineering and sales PCs attached. The engineering and the sales PCs are in different IP subnets at layer 3 and we have a router to route traffic between them. 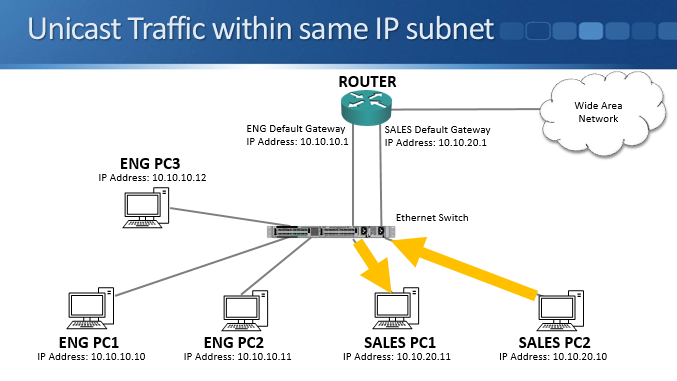 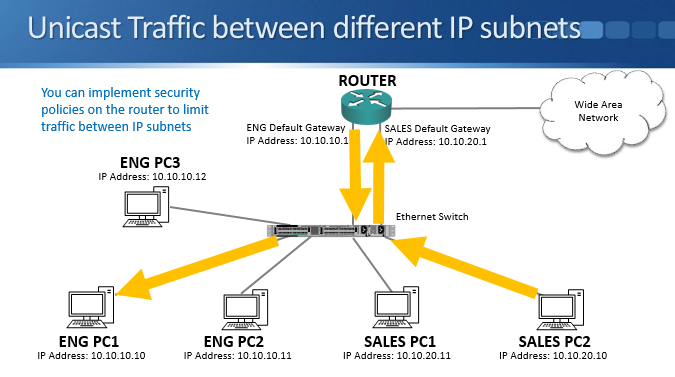 The router will then route the traffic out its engineering subnet interface. The traffic will reach the switch and be sent out only the port which the engineering PC is plugged into.

From these examples you can see that switches send known unicast traffic out only the exact ports it needs to be sent out of, whether it’s within the same or between different subnets. This provides good security and performance. 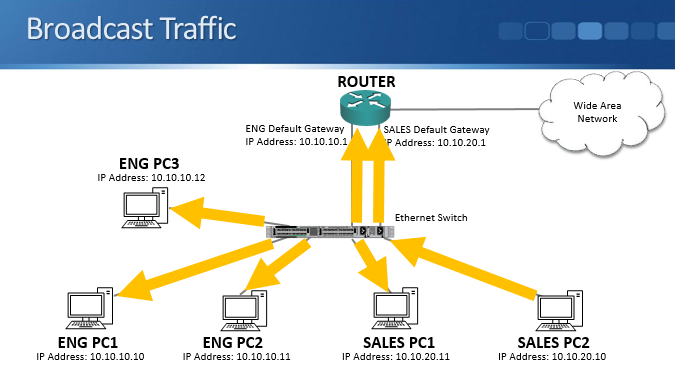 Broadcast traffic however acts differently. Using the example above, let’s have a look at this and see how it works. The sales PC, PC2, sends out some broadcast traffic which comes into the switch. The switch floods broadcast traffic out all ports apart from the one that it was received from. The traffic goes absolutely everywhere, including to PCs that are in both the engineering and sales subnets.

This affects security because the traffic bypasses any router or firewall layer 3 security policies at layer 2. Even if you have security configured, when a sales PC sends out broadcast traffic it will bypass that and still hit the engineering PCs. A layer 2 attack will reach PCs in the other subnet even though you are blocking traffic between them at layer 3.

It also affects performance. Every end host has to process the traffic, and the traffic will use up bandwidth and switch resources on links it was not required to travel over. 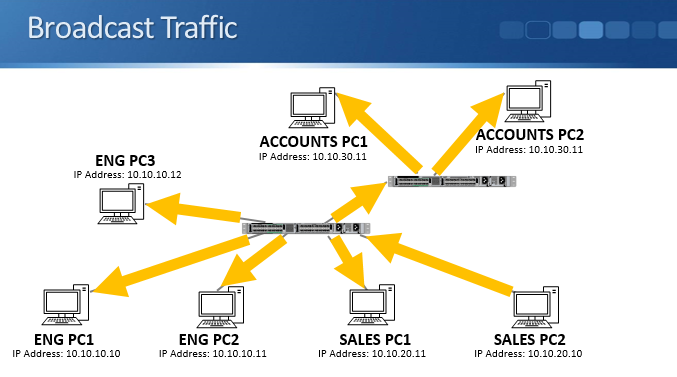 To highlight that, let’s use the slightly different network topology above. We’ve got the same switch in the middle where sales and engineering PCs are connected. That switch is also connected to another switch in a different part of the building, and on that switch there are accounting PCs plugged in. When the sales PC sends some broadcast traffic, it gets flooded out all ports. That will traverse to the other switch and that switch will do the same on all its ports. Broadcast traffic hits the accounts switches and PCs even when it’s not required there. 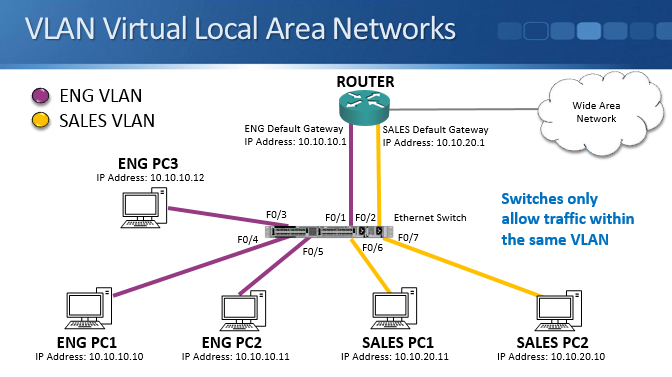 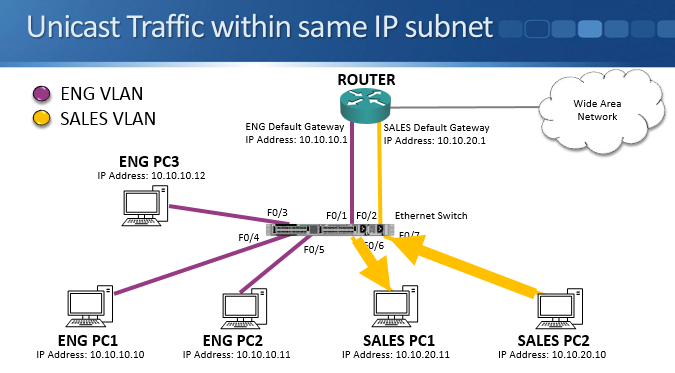 Nothing changes for the unicast traffic within the same IP subnet scenario. The switch sends traffic from sales PC2 to sales PC1 out only the port to which sales PC1 is plugged into. 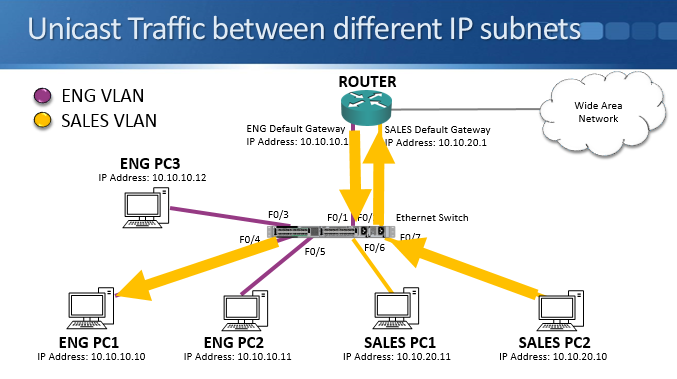 The behavior of unicast traffic between different IP subnets also remains changed. Sales PC2 sends traffic to an engineering PC. The switch only allows traffic within the same VLAN, but since the destination MAC address is the sales PC2’s default gateway on the router interface which is also in the sales VLAN, this isn’t a problem. The switch sends out only the port which the router’s sales VLAN interface is connected to.

Unicast traffic both within the same subnet or between different subnets, works the same whether we’re using VLANs or not. 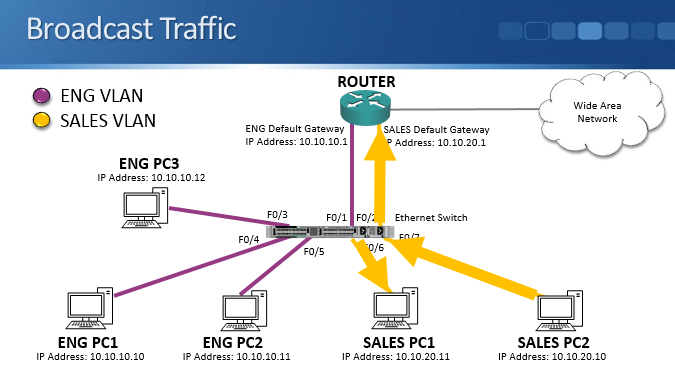 The big difference and benefit is for broadcast traffic. For example, sales PC2 sends out broadcast traffic, it hits the switch and is flooded out all ports… but only those ports that are in the same VLAN. This improves security and performance as it will not be forwarded to any of the engineering PCs, the traffic only gets flooded where it needs to go.

Broadcast traffic needs to be flooded within the same IP subnet and VLAN so that ARP requests can work. 10.10.10.10 wouldn’t be able to find the MAC address of 10.10.10.11 and communicate with it without sending broadcast ARP requests.

Broadcast traffic such as ARP does not need to be flooded across IP subnets and VLANs though. If 10.10.10.10 wants to communicate with 10.10.20.10, it sends a broadcast ARP request for its default gateway router which is in the same VLAN. The router has interfaces in both subnets and VLANs so it is able to forward traffic between them.

Understanding and Configuring VLANs from Cisco

Labminutes.com have some great advanced tutorials if you want to take your Cisco knowledge to the next level.