In this NetApp training tutorial, you’ll learn about SnapDrive, SnapManager, and SnapCenter, which can be used to give you client-side integration for taking snapshots for your SAN protocols. Scroll down for the video and also text tutorial. 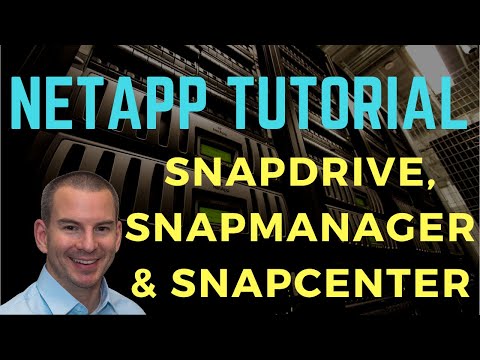 For your SAN volumes, however, the ONTAP cluster does not take scheduled snapshots by default. The reason for that is because of the different ways that NAS and SAN protocols work.

With your NAS protocols, the ONTAP system itself has got complete control of the file system on the volume. So, whenever it’s timed to take a new snapshot, it can easily pause that volume so it can take a clean, consistent snapshot.

To make sure that that doesn’t happen, we want snapshots to be controlled from the client-side for our SAN protocols.

Now, if you’re worrying also about their writes being paused when we take our snapshot, that doesn’t cause any issues, because when we do take a snapshot, it happens nearly instantaneously. It’s not a problem to pause writes to the actual volume just momentarily while the snapshot is being taken.

The ONTAP system itself is by default going to control snapshots for our NAS volumes, but for our SAN volumes, we want that to be controlled from the client site. How is that going to work? Well, with software that is installed on the client, and there are a few different options as well.

The first option is the SnapDrive. The available SnapDrive products are:

SnapDrive is client-side software that is installed on the host itself, and it provides tools that allow the client to provision and manage its own storage.

So, you’ve got a host and you install SnapDrive on there. You then run the SnapDrive software on the host, and from the host, it can create its own LUN on the ONTAP storage. Obviously, you need to provide a valid administrator username and password for it to be able to do that. It also enables fast, file-system-consistent snapshot copies.

When you install SnapDrive on the client, it can create its own LUN with the SAN protocol, and it can control taking its own snapshots as well. The backup and restore can also be automated. On the client side, you can configure a schedule to automatically take snapshots. This software can also integrate with SnapMirror and SnapVault.

A LUN can be resized from the client while remaining online when you’re using SnapDrive. LUNS can also be cloned, and unused space in the LUN can be reclaimed by the storage system. SnapDrive works in both physical and virtual environments such as VMware. SnapDrive provides operating-system-level consistent snapshots.

SnapManager is additional client-side software that works in conjunction with SnapDrive. When you install SnapManager you need to have SnapDrive installed already.

If you do have, for example, Exchange or, say, SQL running on that particular server, then SnapManager will make sure that the application is not writing to the LUN when you take the snapshot. Again, snapshots happen instantaneously. So it’s no problem to pause writes just for the short time it takes for that to occur.

Another feature that you get with SnapManager is that databases can be easily migrated to NetApp storage. Say that you’ve got an existing Exchange server which is using the local disks inside that server or the Exchange mail stores.

You can install SnapDrive and SnapManager or that Exchange server. When you do that, it’s got tools that let you easily migrate the mail stores from the local disks to the ONTAP storage.

SnapManager can also be integrated with FlexClone for fast and space-efficient test and development clones.

If you had 50 signed clients and you’re using SnapDrive and SnapManager to manage your snapshots, you have to do that separately on each individual client. So, this is where SnapCenter comes in.

SnapCenter is a separate server, and it provides centralized control and oversight and enables users to manage application-specific backup, restore, and clone jobs of the enterprise’s different applications, databases, and VMs.

Check the NetApp Interoperability Matrix Tool for information. The best practice is to use SnapCenter to take consistent snapshots for SAN protocols. For your NAS volumes, you can have that managed by the ONTAP operating system itself.

For your SAN protocols, you should use SnapCenter for that to give you that client integration so that the snapshots can be controlled to make sure that the client is not writing data at the time that the snapshot is taken.

The easiest way to use it is to check this first option, the storage solution search. When it opens, I’m going to search for SnapDrive to see what versions of Windows this is supported on. You can see that it gives the option to add SnapDrive for windows. So I will add that, and you see it will show up on the right-hand side, and then I will click on skip to results.

If I go back to the start, to the Interoperability Matrix Tool again and click the first option again, and then this time I’m going to search for SnapCenter. So I will look for SnapCenter and click on the SnapCenter host plugin, see it shows up on the right, and then skip to results.

SnapCenter is supported by the latest versions of the software. SnapDrive and SnapManager are no longer being used on the latest versions of the software. And that’s not just for Windows. That counts also for your Unix operating systems and also for VMware as well. The latest best practice is to use SnapCenter for managing your snapshots for your SAN protocols.

Click Here to get my ‘NetApp ONTAP 9 Storage Complete’ training course, the highest rated NetApp course online with a 4.7 star rating from over 1000 public reviews.