In this Cisco CCNA tutorial, you’ll learn about the other main product offerings that Cisco have other than their routers and switches. Scroll down for the video and also text tutorial. 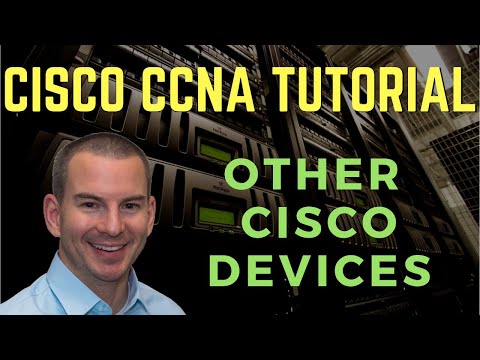 The Cisco Firewall is the Adaptive Security Appliance (ASA), and you can see a picture below. The Intrusion Prevention System (IPS) from Cisco is the SourceFire FirePower IPS.

That can be bought either as an appliance or more commonly now it will be either a software or a hardware module that lives inside the ASA Firewall.

For collaboration, Cisco have Unified Communications Manager which is a software product, which is an IP-based PBX. It replaces traditional PBXs, Private Branch Exchanges, which controlled the phones that you would see in buildings a long time ago. A lot of modern companies still are using traditional PBXs, but IP PBXs are getting more and more popular.

Cisco’s Unified Communications Manager is one of the most popular IP PBXs that are available. If you are going to be using the Cisco UCM to control your phones, you’re also going to need to have IP phones on your desks. So, Cisco produce those as well.

Cisco also do high-end high-definition video conferencing systems. That’s Cisco TelePresence, and you can see a picture of one of the available TelePresence models on the right of the picture above. Another really popular product that Cisco have is Cisco WebEx, which is used for meetings.

Finally, there’s also Data Center. You can see a picture of the Unified Computing System (UCS) blade server on the right of the picture below, as well as the blade server on the left. Cisco also have standard rackmount servers as well. With the UCS, Cisco moved into offering compute where you can actually run your servers directly on Cisco hardware.

The other main product that Cisco have for the Data Center market is the Nexus Switches. These are very similar to the standard Cisco Switches, which run the IOS software. They do exactly the same job, but these are often a bit higher-end switches on they run the NX-OS software instead.

The commands in NX-OS and IOS are very similar though. After you’ve learned the information on switching, you can pretty easily take those skills across to the Data Center as well.