In this NetApp training tutorial, you’ll learn about LUN space reclamation, which is a way that we can make sure that the amount of space used in our LUNs is reported correctly on the ONTAP system. Scroll down for the video and also text tutorial. 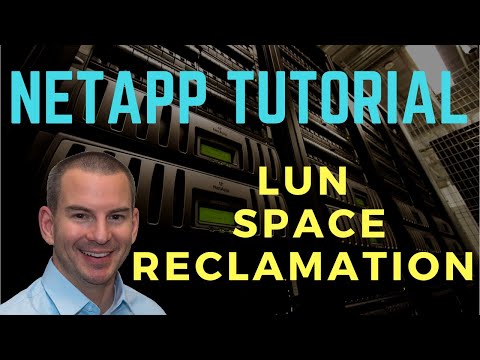 With our SAN protocols, the hosts manage the file system on their LUNs. This is different from the NAS protocols of NFS and CIFS wherein the storage system manages the file system.

With NAS we’ve got file-level access, but with SAN, the clients have got block-level access. They connect to their LUN, they format it with a file system, and it’s the hosts themselves that are directly managing the file system.

As a result, the host and the storage may report the used space differently because the storage system does not have the same kind of visibility into the file system.

Then, the client writes a third file, File 3, to the LUN. This also consumes 25% of the LUN space. Now, the client reports 75% used, and the storage system also reports 75% space used.

So you’re maybe thinking, “Okay Neil, I can’t see any problem there,” but now we start to get into the problem. Next, the client deletes File 1 and File 2. The client doesn’t actually send any notification to the storage system by default.

It just knows itself that those blocks are no longer in use and it’s able to write new data to those blocks. It doesn’t do anything to physically delete the blocks on the storage system.

Then, the client writes a fourth file, File 4, to the LUN. This is also consuming 25% of the LUN space. Now, the client correctly reports 50% space used because the client, of course, has got full visibility. The storage system reports 100% space used since it doesn’t know about the free space.

In our example again, the client writes File 5. The client always reports correctly, it sees 50% space used, and the storage system is always going to see 100% used from this point on.

If we looked at an actual storage utilization tool on the client, the disc defragmentation tool on a Windows client for example, you can see that it can see the files that are taking up contiguous space. It includes fragmented files, unmovable files, and free space. The storage system does not have this kind of visibility into the file systems though.

The storage system will see that now as free space so it can reduce the size of the used space when you’re using thin provisioning.

There’s a signal from the storage system to the client going back in the other direction. The storage system will notify the host when the LUN cannot accept writes due to the lack of space at the volume level.

If the volume gets full, the storage system will tell the client that it can’t accept any new writes. It then makes the LUN read-only, rather than taking it offline.

The client won’t be able to make any writes but at least the client can still see the LUN. It can still do reads from it and it’s still online. Obviously, that’s a lot better than the LUN going completely offline and the client having no access to it at all.

The way that you enable space reclamation is at the command line. You use the command:

You would need to specify your volume and your LUN, then, you enable space allocation. This is configured at the LUN level.

Before you do this, you must verify that the client operating system does support SCSI thin provisioning. It is needed to be supported on the client for this to work. It can cause problems if the client does not support it, therefore, space allocation is disabled by default.