In this NetApp tutorial, you’ll learn about Fabric Pool, which is an ONTAP storage tiering technology. It keeps your hot recently accessed data on high performance storage, on your primary storage, and it tiers off your cold data to lower performance, but lower cost object storage. Scroll down for the video and also text tutorial. 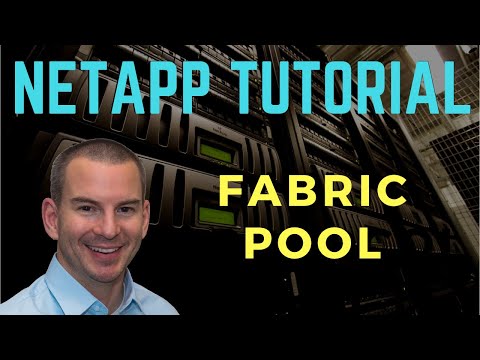 If you’re using an AFF or FAS system, then the performance tier aggregates must be SSD only, it cannot use HDD or flash pool aggregates. In Cloud Volumes ONTAP and ONTAP Select, HDD aggregates are also supported, but SSD is still preferred. For the object storage, you can use AWS, Azure, and IBM cloud or StorageGRID for the capacity tier.

Snapshot-only and Backup tiering policies were available when Fabric Pool first came out in ONTAP 9.2, and the Auto tiering policy became available later, in version 9.4.

When you’re setting this up, Fabric Pool associates a performance tier aggregate with the object storage capacity tier and the tiering policies are applied at the volume level. So when you first set it up, you associate an aggregate with an object store.

The aggregate is the performance tier, and the object store is the capacity tier. But for configuring your policies, you can get more granular than the aggregate level. Your policies are actually configured at the volume level. Therefore, there are different volumes in the same aggregate. Using the same performance tier, we can have different policies applied which means that they’re going to be treated differently.

The time to wait before data is marked as cold and moved off to the capacity tier can be configured from 2 to 63 days for the Snapshot-only and the Auto policies. A temperature scan monitors the activity of each block in Fabric Pool aggregates. A tiering scan then collects the cold 4K blocks and packages them into 4MB objects to PUT into the object store.

The Snapshot-only tiering policy tiers cold Snapshot-only blocks to the capacity tier. And Snapshots are marked cold and tiered after two days by default. Now, blocks that are in both the Active File System and in a snapshot remain on the performance tier. This is going to happen in normal operations, right?

Now, with your Snapshot-only tiering policy, blocks that are only in the snapshot that are not also in the Active File System, can be marked to be tiered off to the object store. Because of that, you still need normal backups of the performance tier aggregate. You might have those snapshots that have been tiered off.

The next policy we’ve got is the backup tiering policy. That is for SnapMirror or SnapVault target volumes only. On the destination side with the backup policy, the temperature and tiering scan does not apply to those volumes. All data is directly tiered to the capacity tier.

All data in an Auto policy volume is eligible to be tiered to the capacity tier. Data is marked cold and tiered after 31 days by default. Any blocks that haven’t been touched for 31 days are going to get tiered off, but you can change that timer if you want to.

Now I said, “All data in the volume.” Actually, metadata always remains on the performance tier. So again, you might see a file that has been tiered off, and think, “Oh, well I don’t need to include that in my backup set on the performance tier.” But you do, because the metadata still there. Fabric Pool is not any kind of backup solution. You still need to do your normal backups and Fabric Pool does not replace that.

If the policy on the volume is auto and the read is sequential, not random, then it will stay marked as cold. If it is the backup policy, it makes sense there as well that it’s going to stay on the object store. If the performance tier is over 70% full, we want to maximize the capacity on the SSDs.

Obviously, if it hadn’t been touched for a whale and it just gets retrieved once, there’s a good possibility it’s not going to be retrieved again for a while. To maximize the performance capacity on the performance tier, it’s going to remain on the object store.

When we do the configuration, it is the aggregate that gets associated with the object store. It’s quite likely that it’d be multiple volumes in that aggregate. The different volumes can have a different policy applied but one sort of policy that wasn’t mentioned here is you can also turn off the tiering.

Deduplication, compression, and compaction savings are replicated from the performance tier, if they’re enabled, to the capacity tier. Some tools are available to help you decide whether enabling Fabric Pool on an aggregate is a good idea or not.

There is an Inactive Data Report that you can turn on, which will show how much data in an aggregate is cold. You can see if there’s a lot of data that would be marked as cold, then that would be a good candidate for enabling Fabric Pool there. 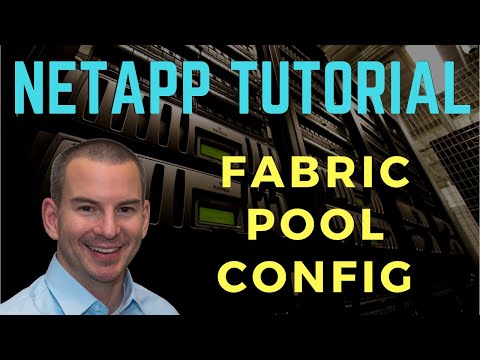