In this NetApp tutorial, you’ll learn about disk shelf numbering and how disk shelf IDs work, and I’ll also explain the best practice way to configure it. Scroll down for the video and also text tutorials. 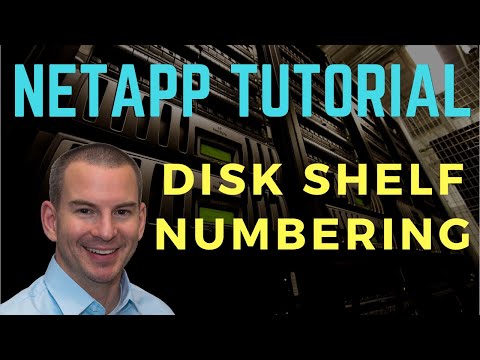 Then, let’s say that we’ve got a stack of SATA drives. So these are three individual shelves, and I will have these configured in a stack.

If any of these cables or any of the ports went out, we would lose connectivity to some or all of our disks. For our storage system, we always want it to be highly redundant. We don’t want to have just that one path. So we will use a second SAS port on the back of our controller and connect it down to the bottom shelf in the stack with that.

So that’s our MPHA, our Multipath High Availability Connection, giving us two paths down to the disk shelves. So if any of the cables of the ports fail, we’ve still got that other path, and we can still get to all the disks.

So, we do the same thing from a SAS port on the back of Controller 2. We connect to the top shelf in the stack, and then we daisy-chain down SAS cables between the shelves in the stack. We also have a multipath HA connection from Controller 2 to the stack.

Now, let’s say we’ve got another stack of disk shelves. Then, we’ve got a stack of SSD drives as well. Best practice is to have different types of drives in different stacks. It’s a different stack, so it will have separate connections using separate ports on the back of our controllers.

Controller 2 is there as a high availability backup. We’ll say that the second SATA and SSD drives are owned by Controller 2, with Controller 1 as its backup.

Now, let’s talk about how the numbering works for them because the controllers need to be able to identify the disks they will be talking to. With our numbering, each of our shelves has a shelf ID. I’ve got a shelf in the picture below. The shelf ID is shown on the left, and you can set the shelf ID on each of your shelves.

With the numbering, you can have up to 10 shelves in a stack. That depends on the hardware types you’ve got, and there are also recommendations.

The numbering starts at number 0, and if the chassis has internal disks, they’re assigned shelf ID 0. Some of the different models of available platforms came with internal drives in the chassis, and some did not.

If you’re using a chassis model with internal drives, then ID 0 is assigned for the internal drives. Different HA pairs in a multi-node cluster can reuse the same shelf ID numbers.

This is what not to do because you can add additional shelves to a stack later on. You don’t have to start with a fully populated stack. See our example here. We’ve got a couple of stacks. We’ve got a stack of SATA drives and a stack of SSDs, and we’ve got four shelves in each stack right now.

If you look at the SATA stack, it goes 10, 11, 12, 13, 18, 19, 20, and 21. It’s not contiguous numbering, and it’s not logical. This can make things confusing and make it more difficult to troubleshoot later. So you want to make sure that you’re always going to be using contiguous numbering.

The way that you would do that is exactly the same example again, with four shelves in each stack. You start with 0, 1, 2, and 3, then 10, 11, 12, and 13 on the second stack. In that way, when you do add additional shelves, you can have the numbering still contiguous.

The other thing to tell you here is when we’ve got a cluster with more than two controllers, two nodes in there. So let’s say that we have got a four-node cluster. Well, on this first HA pair, Controller 1, Controller 2, we would do the numbering like I just described, starting with 0, then 10, then 20, then 30.

Every one of the shelves assigned to this HA pair must have a unique ID, but we can reuse the same numbering plan for Controllers 3 and 4.

For example, this was in stack ID 1, the shelf ID is 0, and the bay here is 23. When we’re in the system manager or the command line viewing information there and see information about that disk, that disk would be identified as 1.0.23. Obviously, the bay next door would be 1.0.22.

What are the best practices of shelf numbering for attaching SAS shelves to a storage system?: https://kb.netapp.com/Advice_and_Troubleshooting/Data_Storage_Software/ONTAP_OS/What_are_the_best_practices__of_shelf_numbering__for_attaching_SAS_shelves_to_a_storage_system%3F