In this Cisco CCNA tutorial, you’re going to learn about the final layer in the OSI model, which is Layer 1, the Physical Layer. Scroll down for the video and also text tutorial. 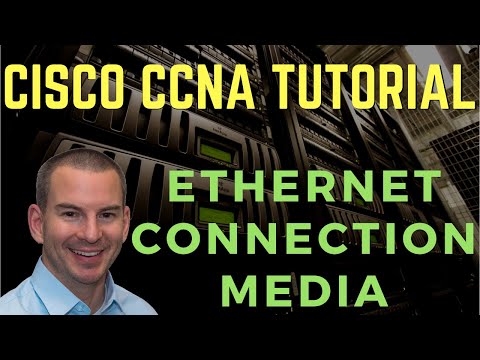 OSI Layer 1 conveys the bit stream, meaning it puts the actual bits onto the wire. That could be electrical impulse over copper cables, light over fiber optic cables, or radio signals over wireless.

It also takes control of the network at the electrical and mechanical level. It provides the hardware means of sending and receiving data, including defining the cables that will be used, the interface cards, the Ethernet ports, WAN ports, and the physical aspects of the network.

Now, we’re going to focus on the Local Area Networks. Our ethernet LAN connections can be carried over coaxial cable, which was the original implementation, but that’s not used anymore.

What we have nowadays are twisted copper pair cable, or fiber optic, or wireless. Starting off, copper cables should be used as Unshielded Twisted Pair (UTP) cables. They’re commonly used to connect desktop computers to switches. The connector type is RJ-45 and the maximum length of the cable is 100 meters.

Back when CAT5 first came out, we didn’t have 10 Gb, 40 Gb, or 100 Gb Ethernet back then. So, a CAT5 was fine for carrying the maximum bandwidth connections that were available then. You still will find some offices have got CAT5 cable in there. If you want to carry 10 Gb ethernet, then the minimum is Cat6 cable.

You’ll find in a lot of enterprises now that they go up to 10 Gb Ethernet, but 40 Gb Ethernet and 100 Gb Ethernet are going to see more common deployment as time goes on.

Cabling two computers to each other is not a normal thing to do. It’s not a very big network if you’ve only got two computers there. So, if you were in a pinch and you needed to copy some files from one computer to another, and you had no other way of doing it, you can connect them back to back with a crossover cable, and you could transfer the files that way.

But we’ve got things like USB sticks nowadays, and in a normal office, we’ll have a switch there that we could connect them through, so it’s very rare that you would ever consider connecting computers back-to-back with each other like that.

However, modern switches support Auto MDI-X where the receive and transmit signals are reconfigured automatically to get the expected result. So with modern switches, you don’t have to use a crossover cable. You can use a straight-through cable as well and that will still work.

Fiber supports longer distances and higher bandwidth than is possible with copper. The kind of places where you use fiber cable would be if you’re connecting between two separate buildings within the same campus. Again, we’re still talking about the local area network here.

All of our PCs and local area network are going to be in the same building or within the same campus at most. When we are in a campus kind of environment, maybe a university and we want to cable our buildings together, typically, the connections between switches in different buildings we’ll use fiber optic cables.

Another reason for using fiber is for the switch to switch connections inside a building because we’ll typically require higher bandwidth between direct connections between switches in the building and copper might not be able to connect.

Single-mode can go much further. It can go up to several kilometers, again, depending on the cabling type and the other physical hardware you’re using.

There’s a lot of different types of fiber connectors, depending on the type of cable you’re using, whether it’s multi-mode or a single-mode, the kind of distance it’s going over, as well. There are going to be different connectors there.

You should also choose the correct type of transceiver that matches the connector and the type of cabling that you’re using.

Power over Ethernet (PoE) can be used as a convenient way to get the power down to your PoE capable devices, such as IP phones and wireless access points. In the example below, we’ve got an office and they’ve got IP phones on their desks, and they’re using Wireless Access Points as well.

The traditional way to have those on the network is that they would all be connected into a standard switch. If you’re using a standard switch, it does not support Power over Ethernet so you’re going to need to have power supplies plugged into all of your devices.

Let’s say we have 100 IP phones on the desks there, then every single one of those IP phones is going to have a network cable plugging it into the switch for the network connectivity. It’s also going to have a power supply plugged in.

However, there is a more convenient way that we can do this, and that is using a PoE Power over Ethernet switch. They look the same as standard switches, but they have the added PoE functionality.

When you use a PoE switch, the power is sent down to the device over the standard network cable. So, it saves you from having to use a separate power supply for all of those different devices. When you do have an office that has got IP phones deployed in there, it is most often used that you’re going to have a PoE switch there rather than standard switches.

Another thing that you’ll sometimes see with PoE that is not as common is if you’re not using IP phones but you do have just Wireless Access Points there. If you’ve got a Wireless Access Point which is in a location where it’s hard to get power to, for example, maybe it’s in the roof in a warehouse, then what you can do is you can use a power injector.

Rather than putting in an entire Power over Ethernet switch, and if you’ve already got a standard switch in there, what you can do is buy a power injector.

The Fundamentals of Ethernet Cabling in an Enterprise Data Network

The Role of the Physical Layer