This is the sixth tutorial in my ‘Practical Introduction to Cloud Computing’ course. Click here to enrol in the complete course for free! 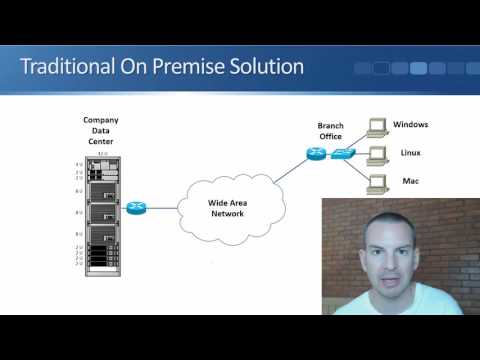 The next essential characteristic of code computing to cover is Broad Network Access. As usual we’ll have a look at the NIST definition first:

‘Capabilities are available over the network and accessed through standard mechanisms that promote use by heterogeneous thin or thick client platforms e.g. mobile phones, tablets, laptops and workstations’.

The cloud characteristic of Broad Network Access means that the service can be accessed from multiple locations (such as from a corporate office or from home) using multiple different types of client (such as a Windows PC or an Android mobile).

On Premises and Cloud Comparison

Let’s compare this with a traditional on-premise solution. For this example there’s a small company with a rack at their headquarters which is populated with a mail server, database server and web server.

They also have other branch offices and teleworkers, so they need Wide Area Network connectivity. The connection between the branch office and the main site could be a Virtual Private Network over MPLS or the internet, or maybe it’s a direct leased line between the two offices.

In the branch office, the users are working on a mix of Windows PCs, Linux and Macs. It doesn’t really matter which kind of desktop they’re using, they’re all able to access the servers in the company data centre in the main site.

The teleworkers typically work from home or a hotel and could be on a laptop, tablet or mobile. Again it doesn’t really matter, as long as the applications running in the main site support the different types of clients, and as long as we’ve got network connectivity everywhere then everything’s going to work just fine.

Okay, so that’s how it works with a traditional on-premise solution.

Now let’s take a look at how it works with a Cloud-based solution:

You can see we have exactly the same network typology. The only difference is that the servers are now in a Cloud data centre provided by a Cloud service provider, rather than in our own on-premises data centre. As far as the network connectivity goes, it’s exactly the same.

If you’re a network engineer who’s going to be doing the design as you transition from on-premise to a Cloud-based solution, this is great news because you don’t need to learn anything new. You just do the network design exactly the same way as before. There’s not a new skill set to learn, you can apply your existing knowledge.

This is the sixth tutorial in my ‘Practical Introduction to Cloud Computing’ course. Click here to enrol in the complete course for free!