In this Cisco CCNA tutorial, you’re going to learn about the three main types of traffic that will send over an IP network, which are unicast, broadcast, and multicast. Scroll down for the video and also text tutorial. 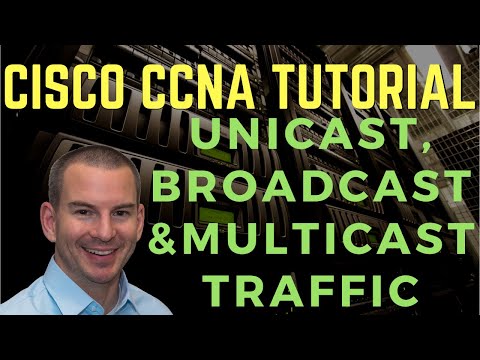 I want to mention how unicast traffic works to multiple hosts first because this is going to help you understand why we have multicast traffic. You see the sender over on the left. It’s going to stream some video traffic, and let’s say the bandwidth of the video stream is 1 MB.

We’re sending a video stream and it’s 1 MB in bandwidth. We’re sending three separate copies of it, so that would take 3 MB worth of bandwidth from the host over on the left, also throughout that part of the network as well.

With multicast, we send one copy that goes to multiple different destinations. The sender sends one copy of that same video stream, and then that one copy then gets sent out to all of the interested receivers. Rather than sending three separate copies taking up 3 MB in that example, we send one copy, it only takes up 1 MB. We’ve got good bandwidth savings there, but it goes to everybody that’s interested.

The difference between broadcast and multicast traffic is that broadcast traffic goes everywhere on that particular part of the network, whether the receiver has requested or not.