In this Cisco CCNA tutorial, you’ll learn about interface speed and duplex. Scroll down for the video and also the text tutorial. 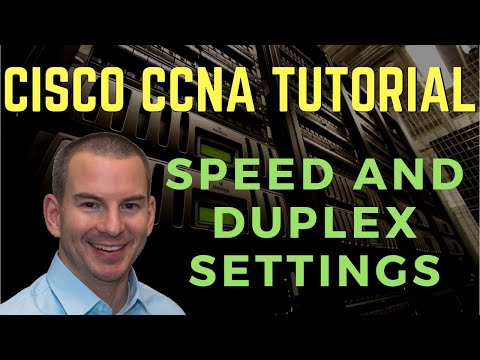 I just wanted to personally express my thanks for the great course you have put together. I passed my CCNA today after starting your course in February, so around 3 months from start to finish. I’ve tried to do my CCNA before but got bored and lost interest, but yours is the first course I’ve completed.

Interface speed and duplex are set to ‘auto’ by default. So both sides of a link should auto-negotiate to full duplex and the fastest available speed. They should do that automatically. The default is ‘auto’ on Cisco devices.

Best practice is to manually set the speed and duplex on ports connected to another network infrastructure device, such as a router, a switch, a firewall, or a server. Because if you set it manually, that is just a little bit more reliable.

To be honest though, ‘auto’ should work just fine as well. In a normal building, you’ll maybe have hundreds or even thousands of PCs, so you’re not going to configure the speed and duplex for all of those manually. But you’ll have less amount of network infrastructure devices and servers, and best practice is to set the speed and duplex on there manually.

It’s very important to set matching speed and duplex settings on both sides of the link. So, either leave both sides set as auto or set both sides manually. Do not have one side at ‘auto’ and the other side set manually.

Let’s have a look at the commands to do that. At the interface level, duplex is either full or half, and then speed is the speed of the interface. So let’s do that in the lab. I’m already in the interface configuration on my switch. I will set the 'duplex full'. This is a fast ethernet link, so I’ll set it to 'speed 100'.

Notice when I do that, it will bring the interface down, and then it will bring it back up again. Right now, I haven’t configured this on the router. So it’s ‘auto’ on one side and manual and the other. I don’t want that, so I will go on to the router, and it’s already in the interface configuration as well.

I’ll also set 'speed 100' and 'duplex full' on this side. That was all the things we want to do for our initial configuration.

After we’ve done that, we want to verify that everything is working as expected. The first command here is ‘show running-config,’ which will show the entire configuration on the switch. It’s very common to use this command, either just to see what’s happening on a switch or for troubleshooting later.

I’ll go back to the enabled prompt because it’s a show command, and I can enter just the shortened version, ‘show run.’ It will print out the entire running configuration on this switch for me, and I can hit the space bar to scroll down a page at a time. If I want to break out, I can hit Ctrl+C.

So, ‘show run’ shows the entire configuration, ‘show ip interface brief’ shows you the status of your interfaces and which IP address is configured on which interface. Again, if you jump onto a router or a switch and you’re gathering information about it, this is a very common command to use.

I can also do the same command on the switch as well. So I do a ‘show ip interface brief,’ I’m going to get a longer output here because it’s on a switch now. There are more interfaces on there. But, again, it’s exactly the same output.

For example, interface FastEthernet0/1, you see it there as I’m scrolling through this ‘show run’ config. To get straight to it, I could do a ‘show run interface fastethernet0/1,’ and it just shows me that part of the configuration.

If you think there’s maybe an issue with an interface, this is a useful command for troubleshooting that. It also will verify if traffic is passing through the interface or not as well. You see an example here, we’ve had 571 packets output, and 97 packets inputs of traffic is going through that interface.

This command will also show you if you have any errors on the interface as well. So right now, we’ve got zero input errors and zero output errors, so that is all good.

The last command issue here is a ‘show version.’ That will show you the version of IOS, the operating system that is running on this switch or router. I’ll do a ‘show version,’ and I can see the version of IOS that is running on the switch. It’ll also give me some additional information in there as well like how much memory is installed in the device.

FastEthernet0/2 unassigned YES unset up up

2. Shut down the interface connected to R2 and issue a show ip interface brief command again. The status and protocol should show administratively down/down.

3. Bring the interface up again. Verify the speed and duplex setting.

FastEthernet0/2 is up, line protocol is up (connected)

4. Set the duplex to half on Switch 1. Leave the settings as they are on R2.

5. Verify the state of the interface.

The interface is down/down. It will not forward traffic.

FastEthernet0/1 unassigned YES manual up up

FastEthernet0/2 unassigned YES manual down down

6. Set the duplex back to full duplex.

%LINEPROTO-5-UPDOWN: Line protocol on Interface FastEthernet0/2, changed state to up

8. Check if the interface is still operational.

FastEthernet0/2 unassigned YES unset down down

The interface status is down/down.

The interface status is up/down on R2.