What to do in an IT Job Interview

In this post and video I give some advice for what to do in an IT job interview. I want to keep it short so I’m going to cover five main points you probably haven’t seen elsewhere. Scroll down for the video and also text tutorial.

What to do in an IT Job Interview 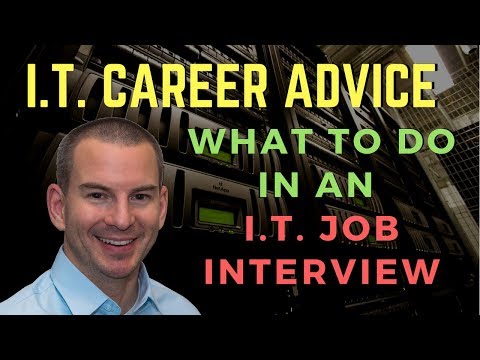 My first tip is to take as many interviews as you can. Apply for every job that you think could possibly be suitable and take every interview that you get offered.

If you remember your first interview, you were probably terrified and didn’t make a very good impression, because when you go into that kind of environment and you’re very nervous people can see it.

When you go for an interview, think about it from the point of view of the other person. Imagine you interview two people with exactly the same credentials but one is nervous and one is confident. Not arrogant, but confident and relaxed. Of course you’re going to form a better impression of the 2nd person.

The way that you get to be like that in an interview is by having done lots of interviews already. You’ll be relaxed because you’re used to being in the situation, and you’ll answer the questions well because you’ve heard them before.

Now you might think “wait, it’s a bit unethical taking all these interviews if I know that I’m not actually going to take the job.” But it’s not really because maybe you get to the interview and the job turns out to be a perfect match for you and you do end up taking it. Or maybe a better job with the same company comes up 6 months later and they remember you. Even if you don’t take the job you’re still meeting people in your industry and building relationships that could be beneficial to both of you in the future.

The worst thing that you can do is turn down interviews for jobs that you think aren’t right for you, waiting for the perfect one. That is a terrible idea because when you do interview for that perfect job it’s going to matter too much to you and you’ve had no practise. You’re going to be super nervous and you’re going to create a bad impression. When that perfect one comes along you want to do have done a lot of interviews already so you’re relaxed in the situation, it won’t feel like such a big deal to you, and you’ll perform much better.

They Already Want You

Speaking from experience, I know it’s really hard to find a good person when you’re conducting interviews. You might find that surprising, but sometimes I’ve done five interviews in a day and nobody has been right for the job.

When you walk into an interview, the interviewer wants you to be right for the job. They’ve probably already interviewed several people that day who haven’t been right. They’ve started worrying that they’re not going to find anybody. Honestly, this happens more often than it doesn’t. They’re desperate to give you the job when you walk in.

Remember when you walk in there that the interviewer is on your side. They’re not interrogating you or trying to catch you out. They’re just checking that you are a good fit and they’re really hoping that you are.

You don’t have to go in there and win the job. They already want you. They wouldn’t have asked you for an interview if they didn’t think you were capable of doing the job. When you get an interview they’ve already looked at your resume and decided you’re qualified to do the job. What they’re doing is checking to see if you’re the right fit to go into that team or not. You don’t have to win them over. Basically, you just have to not blow it. So go in with that mindset. The interviewer is on your side and they want you to succeed. All you have to do is help them out with that.

A good tip I can give you is when you’re in the interview, imagine that you’re talking with people who are already your colleagues at work. So you’re still talking to them in a professional context, but you’re relaxed and confident because they’re the people you see around the office every day. Again, having experience of multiple interviews helps you get into this mindset.

A big thing for the technical interview is to prepare way ahead of time… and I mean way ahead of time. Don’t just start preparing a few days before it when you hear you have an interview. If you’re going to be interviewing for the role of a network engineer then you need to already be an expert in networking. Two or three days is not long enough to learn.

Because you’re reading this I’m going to assume that you want to progress your career. To do that you have to put the work in ahead of time, and nobody’s going to do it for you. When you get home from work, don’t watch TV. Study, read the books, do the online courses and learn what you need to know. The way that you get ahead is through hard work and hustle. If you show that, you’re going to be way ahead of nearly everybody else, and fly up the IT career ladder very quickly.

Your preparation should have been going on for months or for years before the interview, so you have the knowledge to answer technical questions.

As I mentioned on the last point, act in the same way you would with colleagues that you’ve been working with for a year already. Imagine you’re at work and the person at the desk next to you asks you a technical question and you don’t know the answer. What would you tell them? Well, of course, you wouldn’t just make up an answer, right? That would be ridiculous. Don’t do that in the job interview either. The interviewer does know the answer and if you guess you’re going to get it wrong.

Be honest and tell them “I don’t know.” But don’t leave it at that. For example, if I was asked in an interview how often a Windows PC renews its DHCP lease, well I don’t know that off the top of my head. The answer I would give would be: “I’m not sure about that but I do know DHCP and have worked on DHCP servers before. If that question came up at work then I would look it up on Google to check exactly what it is. I wouldn’t want to just take a guess at it.” That’s a perfectly reasonable answer, the kind of thing you would say to a colleague sitting at the next desk if they asked you.

All the interview tips I’ve read say ‘Be early’. DO NOT be early – be on time. I used to carefully plan my day to fit interviews in around the rest of my work tasks. When a candidate showed up 30 minutes early it left me with either a messed up schedule or feeling guilty about leaving them waiting so long. Maybe I’m weird but that always annoyed me. You want to be saying hi to the receptionist 5 minutes before your scheduled time.

Be Nice to the Receptionist

Talking of the receptionist, have a normal, friendly conversation with them while you’re waiting. Every interviewer I know asks the receptionist for their opinion of the candidates. Sitting nervously saying nothing is okay, but you’ll get bonus points for a genuine warm smile and friendly word.

I’m connected to over 10,000 contacts in the IT industry on LinkedIn. Connecting with me opens them up to you as well and is a really quick and easy way that you can build your IT network and job prospects. If LinkedIn asks tell them we’re friends and my email address is neil (at) www.flackbox.com

Haven’t got the interview yet? See my resume writing tips here.

Are you a military veteran looking for career advice? https://themilitaryguide.org/ has you covered.

If you do want to learn more technical skills to boost your career have a look at the free resources on the Flackbox homepage. I’ve got a load of free eBooks and courses there for you.