In this Cisco CCNA training tutorial, you’ll learn about the IP address classes. We’re going to cover Classes A, B, and C which are used for allocating addresses to our hosts, and then Classes D and E. Scroll down for the video and text tutorials. 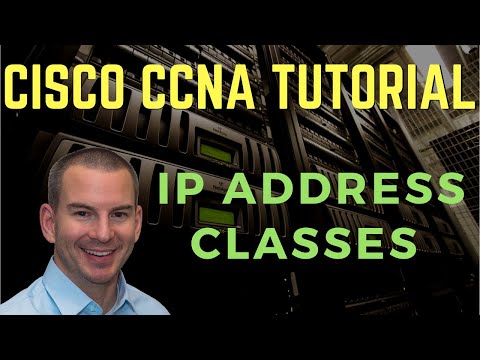 How Internet Addressing Was Meant to Work

Let’s talk about how Internet addressing was originally supposed to work. When IPv4 was first conceived, the designers didn’t realize that there would be a huge explosion of IP address usage. Everybody would be using and would require an IP address.

IP addressing was designed for what was right at that time. As we go through this tutorial, you need to think about the Internet about how it was then to understand why IPv4 was designed the way that it is.

There are a few issues with IPv4 that you’ll learn about and those issues came about because the designers didn’t realize what was going to happen in the future. So as long as you think about it from that point of view, then everything should make sense.

The original way that IPv4 addressing was meant to work is that when a company wanted to communicate on the Internet, they would apply for a range of IP addresses. The global assignment of IP addresses is handled by IANA, which stands for the Internet Assigned Numbers Authority.

From a global point of view, IANA is at the top level and they assign large blocks of addresses to the local authorities in different regions. Companies would apply to their local authority to get a range of public IP addresses.

If a company has 6000 hosts, for example, they would ask for a range of IP addresses big enough to cover that, plus some room for growth in the future as well. That company would then allocate those addresses to their hosts in their different offices.

Unfortunately, when IPv4 was created, the designers didn’t realize how big the Internet was going to get, so they didn’t create a big address space. IPv4 addresses are not enough for every host that needs an address that’s going to be communicating on the Internet. So, IPv4 ran out of addresses.

The longterm solution for the problem is IPv6, which has got a much bigger address space.

As a workaround, Private IP addresses with Network Address Translation (NAT) are currently deployed in the majority of enterprise networks. IPv6 is a longterm solution, but nowadays, private address with NAT is more commonly deployed.

The Internet authorities split the global IPv4 address space into separate classes. Class A addresses are assigned to networks with a very large number of hosts. Class A was going to be a small network portion with a large host portion.

In the figure below, you can see that they just wiped out over 33 million addresses that could’ve been used for addressing actual hosts on the public Internet. If you think about it, they could’ve just used a single address to signify ‘this network’ rather than using 16 million addresses.

Same for the loopback, they didn’t need 16 million addresses to be used for loopback testing. You might be thinking, “Well, there’s this huge shortage of addresses on the Internet, why would they do something crazy like that?”

The reason is that, when IPv4 was designed, they didn’t realize that they were going to run out of addresses, so they thought, “Hey, it’s no problem, we can assign 16 million addresses for testing, it doesn’t matter, because we don’t have a shortage of addresses.”

Let me give you a demo of using the loopback. Let’s open the command prompt and enter the command ipconfig. You’ll see that the IP address 127.0.0.1 is not assigned to any network card, it’s built-in IP.

So, I can ping 127.0.0.1, which is the loopback address, and you’ll see it getting replies which means it’s up. The reason you do this loopback test is to test that the TCP/IP is working on the local machine.

Also, there’s not much point in pinging the local router, if TCP/IP isn’t even working on your laptop. So the way that you verify that TCP/IP is up and running on your computer is by pinging the loopback address.

A company that had a Class A address, would not put all 16 million hosts into a single logical network, that would be terrible for performance and security. They would split that big /8 range up into smaller subnetworks and assign those to their different departments in their different offices.

They would have that huge network that was assigned by the Internet authorities and they would split it into smaller subnets, this process is called subnetting. In this manner, they could assign them to their different types of hosts in different offices.

Class B addresses were originally assigned to medium to large-sized networks. With Class B, the first two bits in the address are always going to be set to 1 and 0.

Again, you would never have a flat subnet with up to 65,000 hosts in there. If you were given a Class B network in the real world, you would subnet it into smaller subnetworks.

The last one that can be used to assign addresses to hosts is Class C and this is used for small networks. Class C has the default subnet mask of /24 which is up to the end of the third octet. With Class C, it’s the first three bits that are important so they’re always set to binary 1, 1, and 0.

Class C is small enough that it could be allocated as-is for real-world deployment. But, we could subnet it into smaller networks as well.

A Quick Note on Private Addresses

I gave you all the addresses that were available in our Class A, B, and C networks. We spoke about the reserved addresses for our loopbacks and the addresses beginning with zero as well.

There’s also a range of reserved private addresses in each class. Those are valid to be assigned to hosts, unlike the other reserved addresses, but the difference is that these are not routable on the public Internet. These were originally designed for hosts in a closed private network but they should have no Internet connectivity.

For example, in a high school, you’ve got students that need to work on PCs. However, you don’t want them to be able to browse the Internet, so you would put them on private addresses.

The benefits that you get from that are:

The different ranges that are used for our private addresses are:

With Class D, the four high-order bits or the first four bits in the first octet are always set to the binary value of 1, 1, 1, and 0 as shown in the figure below.

If we’re using a /24 subnet mask, they would be both in the same subnet. Therefore, the traffic can go directly between the hosts without having to go via a router.

This was video streaming we were doing here, thus, it is two completely separate pieces of traffic. It is going to use 2 MB if it was 1 MB per stream. Now, we can improve this by using multicast traffic.

It still comes from the same source address of 10.10.10.10 and the destinations still have their normal unicast addresses there as well. The difference is that we’re going to send it to this special multicast address. The traffic will then go to all of the hosts that are interested in getting the said traffic.

A good analogy of this is, you can think of it like tuning into a radio station. The hosts, 10.10.10.15 and 10.10.20.15, run an application that said that they wanted to receive the stream for 239.0.0.1. Now, as long as you’ve configured support for this on your routers, the traffic will get forwarded to all of the hosts that are interested in receiving it.

Using our previous example, I’ll explain further why multicast is different and can be more efficient than broadcast traffic.

Notice in the example that on the local subnet, the hosts that are attached to the switch, it only went to the top host at 10.10.10.15, the traffic did not get sent down to the host below that at the bottom.

With broadcast traffic, it would be sent to all hosts on that subnet, not just the ones that wanted it. Multicast is more targeted and it’s more efficient. Another difference is that as long as you’ve configured your routers to support it, routers will forward multicast traffic.

That’s how we were able to get it to the host up in the top right. Broadcast traffic does not go outside its own local subnet and it does not get forwarded by routers by default.

Class E reserved addresses are never really used. You need to know what they are, particularly for the CCNA exam. In the real world, you’ll never come across Class E addresses because they’re not used in production environments. Class D addresses are used if you’re using multicast.

Let’s just have a look at a summary of the different classes: