In this Cisco CCNA tutorial, I’m going to give you a very basic introduction to networking. Scroll down for the video and also the text tutorials. 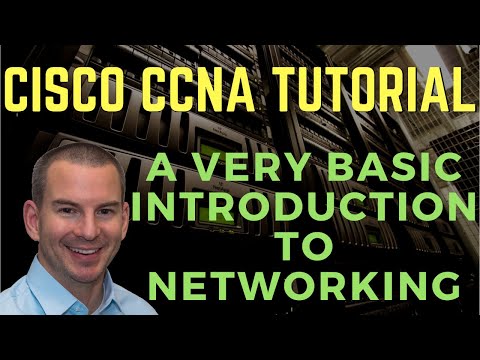 Let’s say that we’ve got an office which is in New York for our company. In that office, I’m going to have end hosts like PCs, a server, and a printer, as you can see in the topology below. They’re going to need to be able to communicate with each other.

So for that, I’m going to put in a network switch, and I’m going to cable my devices to that switch with Ethernet cables. It has got a lot of ports in there, so I’m going to be able to connect to a lot of devices. The switch is what allows connectivity on my Local Area Network (LAN).

In that office in New York, maybe I’ve also got a laptop which is going to connect in over our Wireless Network. So for that, I’m also going to have a Wireless Access Point (WAP) that will connect to our switch. I’ve got all my devices in New York now, and they can all talk to each other.

Local Area Network (LAN) is a network that connects devices that are in the same local area, like in a single office or maybe a university campus. I don’t just want my end hosts in my office to be able to talk to each other. They’re going to want to communicate with other devices out on the Internet as well.

So for connectivity out to the Internet, I’m going to need a bit more of an advanced device, a router. A router can make advanced routing decisions to route traffic between different areas of your network.

Next thing we know, there’s going to be bad guys on the Internet, hackers who will try to attack us, so we need to guard against that. So we’re going to put a firewall in place. Again, you’ll see that our different network devices tend to look very similar to each other, but they fulfill different tasks on the network. The firewall secures the different parts of our network from each other.

In a larger company, we’re not going just to have one office in New York. In our example here, let’s say we’ve also got an office in Boston as well. In Boston, we’re going to have a similar kind of setup, the same kind of devices in there. We’re going to have a Local Area Network (LAN) in Boston, and we’ve also got local connectivity to the Internet from Boston as well.

Now, because we’re the same company, I want to have connectivity between my New York and my Boston offices. I want the end hosts in both those sites to be able to communicate with each other. It is possible that they could communicate securely over the Internet if I set that up.

Looking now at the characteristics of a network, first, we’ve got the topology. The topology is how the devices are connected up to each other. Another characteristic is the speed of the network.

Typically, the faster the network is, the more it’s going to cost you, and the cost is itself a characteristic as well. Things that will affect the cost are the type of devices you have there, the size of a network, the different technologies you’re using, etc.

Other characteristics are security, and I mentioned the firewall a while ago. We’re not going just to have security in our firewall, though. We also have security features on our routers and our switches, and we can have other security devices such as Intrusion Prevention Systems (IPS) as well.

Next, we have availability. We’re going to want to make sure that our network always stays up, and for mission-critical components in the network, typically, we don’t want any single point of failure. So, we will double up on those components so that if anyone fails, we’ve got an alternative component that will still be up and running.

Scalability is also important. We want to design the network in such a way that it’s easy for it to grow with our company without requiring a redesign. Finally, reliability, similar to availability, where we want to make sure again that the network is going to be reliable, that it’s going to continue to work.

Networking Basics: What You Need to Know: https://www.cisco.com/c/en/us/solutions/small-business/resource-center/networking/networking-basics.html

What is a Network?: https://study-ccna.com/what-is-a-network/