This NetApp tutorial is the 2nd of a 2 part series on NetApp Multiprotocol configuration for CIFS and NFS NAS. NetApp Multiprotocol allows both Windows and UNIX based clients to access the same files and folders on the storage system. Scroll down for the video and also text tutorial. 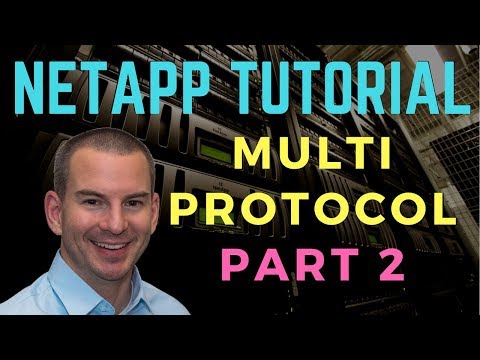 I have never seen any training course in Netapp the way Neil conducted this and the way he breaks down every concept is like watching a movie…I am feeling so motivated and pumped up to retain all this knowledge…thank you!

Name mappings are used to map the Windows user accounts to UNIX or vice versa. They can be configured either in the GUI or in the command line. In both cases we use regular expressions to configure the mappings.

Regular expressions (often known as ‘regex’) are used to match strings of characters and/or numbers. They're used regularly in lots of different areas in IT, like in IP telephony when configuring dial plan rules; and in firewalls and Intrusion Prevention Systems when looking for a string that would signify an attack. Regular expressions are very flexible when it comes to matching strings. This is the reason why we use them to configure the name mappings in NetApp multiprotocol. Always specify the direction when configuring a mapping. The system needs to know whether it is for Windows user to UNIX user or the other way around. Then configure the string that you are looking for and what that stringed is going to be changed (mapped) to. Let’s go through it step-by-step using the below examples.

For our first example, we need to allow a Windows user to access some files and folders that have UNIX security style configured. The user will log into Windows as FLACKBOX\bob, and they should access the data as the UNIX user bobjones.

First we specify the text string we want to match on. Enter this in the ‘Pattern’ field in ONTAP System Manager:

Next, we specify the string which will replace that. Enter it in the ‘Replacement’ field in System Manager, and we’re done. If the UNIX user bobjones will be accessing folders with NTFS security style as FLACKBOX\bob, then we need to configure a mapping in the opposite direction, from UNIX to Windows. The pattern we're looking for is bobjones and the replacement will be Flackbox\\bob. Adding a separate mapping for every single user is not scalable, so for our second example, we’re going to map all Windows users in the FLACKBOX domain to a UNIX user with the same name (e.g. if the Windows username is FLACKBOX\bobjones, the UNIX username will also be bobjones – with the domain name stripped off).

The storage system will actually do this by default anyway, but I want to show you how you would configure the mapping rules here.

With just one name mapping we can configure a rule that will work for all of our users. We need to configure the pattern that we are looking for first. In this example, it’s FLACKBOX\ (the domain name) and then the username which could be anything.

The first part of the string we’re looking for is ‘FLACKBOX\’. Because the backslash is a wildcard in regex, we need to include another backslash before it to say ‘look for literally a backslash. The next character is not a wildcard’.

The first part looks like this: FLACKBOX\\ and it means look for FLACKBOX\

For the next part we need to match the username which could be anything. Since we want to match any random string, we use the dot ‘.’ regular expression wildcard which means any character (a-z,0-9). Then after the dot we add a plus ‘+’ sign which means one or more repetitions of the previous character.

This will match any string of any length following ‘FLACKBOX\’, as long as there is at least one character.

When we put the two parts together, it looks this: FLACKBOX\\.+

There’s one more thing we need to do. Because we need to copy the 2nd part (the username) back into the replacement string, we need to highlight it. We do that by including it inside parentheses.

This is what the final pattern string looks like:

So if a Windows user was logged in as FLACKBOX\bobjones that would match the FLACKBOX\\(.+) pattern. ‘bobjones’ would be caught by the (.+) and because we've put that in parentheses, that is what is copied into a replacement field.

What we're doing is stripping off the domain portion of the username. Here, we will be looking for any UNIX user and we're going to prefix their UNIX username with the Windows domain name when they access files and folders with an NTFS security style.

We will be using .+ as the pattern again since we are looking for a username that could be any string of text. And since we will be copying this into the replacement pattern, we will put the .+ inside parentheses.

On the replacement the string will start as FLACKBOX followed by two backslashes - we need to put two backslashes since we literally mean backslash (not the wildcard). Then we followed it with another backslash one to copy the pattern.

Followed by literally a backslash: \\

Followed by whatever is in the first set of parentheses in the original pattern: \1

This is how it looks:

So if the UNIX username is bobjones, that would be changed to FLACKBOX\bob jones.

If the UNIX username is janesmith, that would be changed to FLACKBOX\janesmith. So that’s how you can map a Windows username to a matching UNIX username and vice versa.

As mentioned earlier above and in Part 1, if there’s no explicitly configured mapping to override it, the system will try matching usernames for multiprotocol access. So you don’t actually need to configure Example 2 as it is done by the system anyway. The last example was just used to show how to configure mappings and how regular expressions works. This setup is typical in a real world deployments. If you need both Windows and Linux clients to have access to the same data, then you will need to configure mixed volume access. Use ‘UNIX’ if the file system is managed by a UNIX administrator and most of the users are NFS clients. In that case, the data will sometimes be accessed by Windows clients, but the security style will always be UNIX.

Use ‘NTFS’ if the file system is managed by a Windows administrator and most of the users are SMB clients. In that case, it is sometimes being accessed by Linux clients, but the security style is always going to be NTFS.

Finally, use ‘mixed’ if the file system is managed by both UNIX and Windows administrators and users consist of a fairly even mix of both NFS and SMB clients. The security permission can be either style. It will be whichever client last set their permissions on that file or folder (as explained in Part 1).

With all three of the options, remember that you need to have multiprotocol configured correctly for all your clients for them to be able to access the data. If the data in a particular volume or qtree is always going to be accessed by only Windows or UNIX style clients, then you don't need to worry about configuring multiprotocol. You just need to worry about your Export Policies and your standard UNIX or Windows file security.